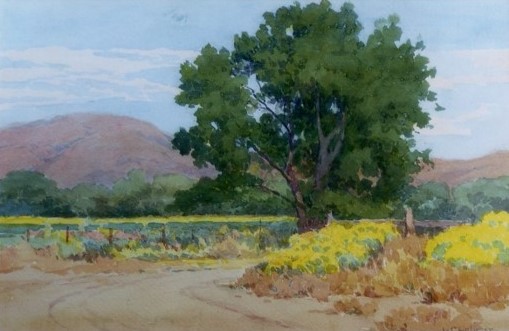 Lorenzo P. Latimer greatly influenced Nevada artists in the early 1900s. He was a success in the Bay Area of Northern California and traveled to Reno, Nevada many times a year.

Born in gold Hill, California in 1857, Lorenzo Latimer grew up in Northern California. He attended the McClure Military Institute in Oakland, CA in the mid-1870s and eventually went on to study under Virgil Williams in San Francisco at the California School of Design. Later he went back to teach there himself and also conducted his own art lessons at the Mechanics Institute. He was appointed chair of the School Committee and held this position for 20 years, through multiple name changes until it finally became The San Francisco Art Institute.

Latimer was a member of many art organizations in the Bay Area. The Sequoia Club, San Francisco Art Association, Mechanics Institute, and Athenian Nile Club of Oakland to name a few. Throughout his career, Lorenzo Latimer received honors for his work that included election to various art societies and inclusions of his large murals in World Fairs. His teaching and his body of paintings continue to inspire present-day members of the Latimer Art Club.

Among his many club memberships, the most rewarding affiliation was the Bohemian Club of San Francisco, still in existence today. Originally founded in 1872, members comprising of writers, artists, poets, singers, and musicians were required to make significant contributions in the Arts onbehalf of the Bohemian Club in order to maintain their membership.

The Bohemian Club owned a retreat called The Grove in Northern California; it comprised an ancient stand of redwoods by the Russian River with which Latimer became familiar and greatly influenced his paintings. He celebrated the magnificent redwood forests and showcased their beauty in his work. Latimer worked in oils but was best known for his watercolor studies. Some of his finest paintings were of Nevada and Yosemite where he embodied the beauty of the streams, rivers, and valleys in summer or autumn days.

Much of Laitimer’s work was done in the field or what is known as “Plein-air” painting. It was during these “Plein-air” excursions in the early 20th century that he captured the Sierra’s and numerous scenes of Lake Tahoe and Fallen Leaf Lake. His landscapes and redwood trees won gold medals at fairs and expositions in Chicago and San Francisco. It was during his trips to the Tahoe area that Latimer began teaching students lessons in “Plein-Air” in Reno, Nevada. In 1921, with the guidance of Lorenzo P. Latimer, his students formed the Latimer Art Club. During the winter months, while Mr. Latimer was in California, he would share a painting with the members to “copy” and they would mail back to him for critiques. These early members, known as “Latimers” created a strong organization, supporting the arts in the area. The club incorporated in 1931 as plans for the Nevada Art Gallery progressed; members were volunteers.  Over the years this has now become the Nevada Museum of Art. Mr. Latimer last visited the club for his 80th birthday in 1937. The club continues to remember him with a birthday card exchange in October.

Many of his paintings are on loan at the Wilbur May Museum in Reno, NV.

It is not certain when Lorenzo P. Latimer started to exhibit his art in Reno, but the Reno Commercial Club, a chapter which came before the Chamber of Commerce, did hold an exhibition of his paintings in November of 1917. It is believed to have been arranged by his friend Walter Nagle who was secretary of the club.*

Over the years the Latimer Art Club has sponsored many programs, presenting a carefully selected array of art exhibits, musical evenings, programs and lectures. LAC continues to sponsor college and high school students with scholarships along with an annual exhibit each year titled, Tiny Treasures Annual “Miniature Juried and Judged Art Exhibition”.